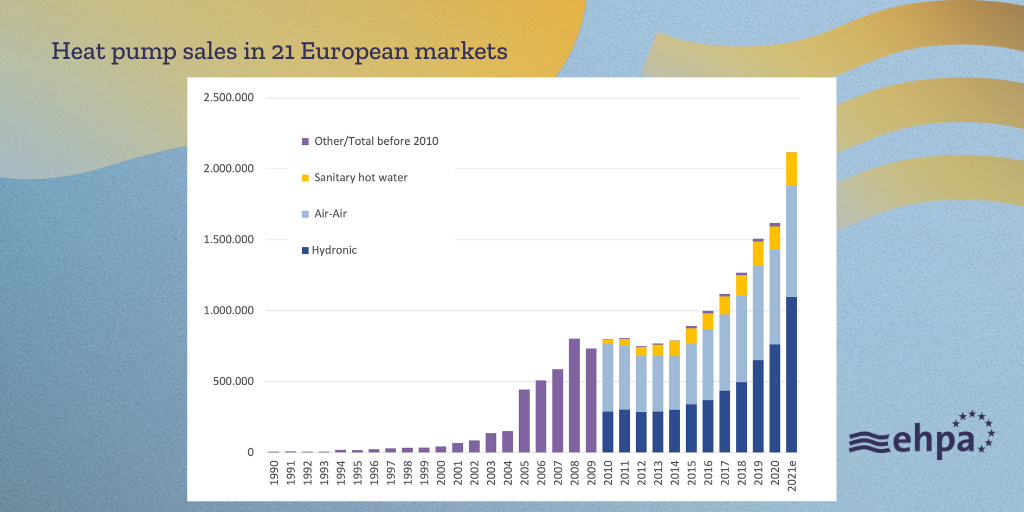 Heat pump sales grew by 34% in Europe – an all-time high, figures published today by the European Heat Pump Association reveal. 2.18 million heat pump units were sold in 21 countries* – nearly 560,000 more than in 2020. This brings the total number of installed heat pumps in the EU to 16.98 million, covering around 14% of the heating market**.

The heat pumps now installed in the EU avoid over 44 million tonnes of CO2 – slightly more than the annual emissions of Ireland - with the heating sector producing around 1000 Mt overall.

“The heat pump sector’s record growth in 2021 is part of a major shift to sustainable heating in Europe. We have a triple whammy: EU policy driving governments to decarbonise the building sector, leaps forward in heat pump technology, and the Covid pandemic which has helped many citizens realise they must upgrade their homes.

“More recently, the terrible war waged by Russia on Ukraine has shown the madness of our dependency on fossil fuel imports for heating”, said Nowak.

"When you look at the heating and cooling sector which accounts for over 50% of total energy consumption, renewable energy accounts for only 11%. The recent energy crisis highlights how important it is to have a cost-effective, reliable, and renewables-based energy system which is where heat-pumps play a critical role in Europe and beyond."

In Europe last year, all national heat pump markets experienced substantial growth, although some have far higher sales than in others. The strongest relative gains for heating heat pumps were achieved in Poland (an increase of 87%), Ireland (+69%), Italy (+63%), Slovakia (+42%) Norway, France (each +36%) and Germany (+28%).

87% of the European market volume was sold in only ten countries (France, Italy, Germany, Spain, Sweden, Finland, Norway, Poland, Denmark and the Netherlands). The top three countries, France, Germany, Italy accounted for half of annual sales.

“These figures could skyrocket further next year as the REPowerEU plan to get off Russian gas and its ambitious targets for heat pumps kicks in. We do see limitations in components supply, though, that may dampen the increase. Here we see the need for an EU heat pump acceleration action plan, to ensure smooth growth and avoid supply or HR bottlenecks,” added Jozefien Vanbecelaere, Head of EU Affairs at the European Heat Pump Association.